IoT adoption not all its cracked up to be? 5 reasons why

IoT adoption not all its cracked up to be? 5 reasons why

by Richard Braithwaite · Published 2nd May 2017 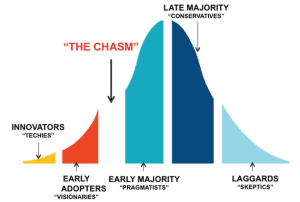 Despite all the LinkedIn posts and IoT trade events there is still little sign of hitting the IoT adoption “tipping point”, we are still, at best, at the Early Adopters stage.  There is increasing awareness and in some cases “proof of concept” level projects within larger organisations but when you come down to the mid and lower tier (which remember is the vast majority of companies) not much is being done.  All in all, IoT is not (yet) delivering substantial value either for end customers or the multitude of companies selling their IoT wares.

Reasons for this?  I can suggest a few and I’m sure there are others!

1. Many SME’s are focused on serving their customers “now” and not so much on what might be possible 2-3 years down the line.

2. To provide an end to end solution (i.e. something that will do something useful for your business) an eco system of technology is required, one vendor can’t provide the whole thing on their own and there are 1000’s of suppliers.  Although the large SI’s are starting to build out solutions (in theory with a clear business case but often not) their (lack of) agility and overly governed internal processes make them difficult to engage with and expensive.

3. Large organisations frequently like to engage with large SI’s and/or software providers in a misguided view of risk and cultural management.  History is littered with the failed ICT projects that prove this is not a sure bet strategy.  Large SI’s are not well placed to help an SME develop and implement their IoT strategy but there is still a need to understand the IoT ecosystem well enough to see how the various discrete components can be crafted into a viable solution.  Many of the IoT “point” providers only have a component of the whole picture.

4. Use cases are often technology led and not business case led.  In which case the value proposition is unclear and organisations are unwilling to invest in “maybe”.

5. Technology is immature.  Issues like device power supply and wireless communication standards are not yet at “production ready” standards (no one wants to swap a battery every 3 months nor deploy 2G devices only to have to replace them all when low power wireless networks mature or standardise).  It may work in a lab but field operation is another story.

Here at IoT Advisory we are helping SME businesses understand the art of the possible and how to leverage the benefits of IoT without a massive programme of investment.  Think big but start small.  We cover both strategy advisory and have a pre-built ecosystem of partners covering devices, wireless networking, data ingestion & analytics to actually realise the vision.