“Ooh he’s here again, the man with the child in his eyes.” sang Kate Bush on her 1978 hit single, her evocative and sensual lyrics washing straight over my 13-year old angst filled teenage head.

Following hot on the heels of her global smash “Wuthering Heights”, “The man with the child in his eyes” was the second single from her ground-breaking album – “The Kick Inside”, helping to firmly establish Kate as probably the original British pop talent of her generation.

“The man with…” was written when Kate was only 13, and first recorded when she was just 16. The depth of her lyrics showed stunning maturity and gave us all a glimpse of her rare, and sometimes, delicate talent.

Although Kate didn’t appeal directly to my punk sensibilities at the time, such was her profile and intrigue, that many of our generation watched her story with interest, but in the years that followed her meteoric rise to superstar status, Kate gradually withdrew from both performance and the glare of public life.

Many wondered why she chose this path. Much to the disappointment of her incredibly loyal fans, perhaps the fragile songstress was simply unable to face up to the responsibility of delivering at the highest-level time and time again.

A world away in middle America in the mid 2000s, responsibility was certainly not something that Doug Dietz shied away from. Doug had been at the cutting edge of industrial design with General Electric (GE) for many years. Rightly proud to be involved in delivering life-saving technology, Doug’s work had helped place GE at the forefront of medical technology with their MRI (Magnetic Resonance Imaging) & CT (Computerised Tomography) scanning equipment.

But Doug’s world was turned upside down one day when he went on a routine visit to see one of his incredible machines in use. And it just so happened to be at a children’s hospital.

Expecting great feedback about how “his machine” was helping save lives, Doug got a rude awakening… 80% of children routinely needed to be sedated just to get them through the scan. As many as 50% missing appointments all together.

At one of the most emotionally charged times in the lives of these young families; with children potentially about to be diagnosed with life threatening and sometimes terminal illnesses; anxious and frightened parents were having to try and guide even more anxious and frightened children through the cold, clinical and forbidding experience of the scanner.

Doug knew the stakes were high, seriously ill children just not getting the help they needed. And this right at the point when time was quite often, literally, of the essence …not to mention wasting valuable clinical time and resources.

No wonder tensions were high! Seen through the eyes of an already frightened and confused 7-year old child, the experience could be terrifying.

Doug knew he needed to act, but his real stroke of creative genius was his innate understanding of the customer. He knew instinctively that he had put the patient at the centre of the scanning experience. He knew he needed to see things from the child’s point of view.

Doug and his Team immediately got to work; reimagining the scanning room, the scanner and even the appointment confirmation. Patients became young “explorers” invited to take the starring role in their own journey to the stars…

…and just at the point when they needed to lie absolutely still, just as they entered the doughnut shaped scanner itself, the young explorer knew would do exactly that. Then the rocket ship could make it through the noisy asteroid storm (and just so happen to give the radiographers the very best chance of a great scan). 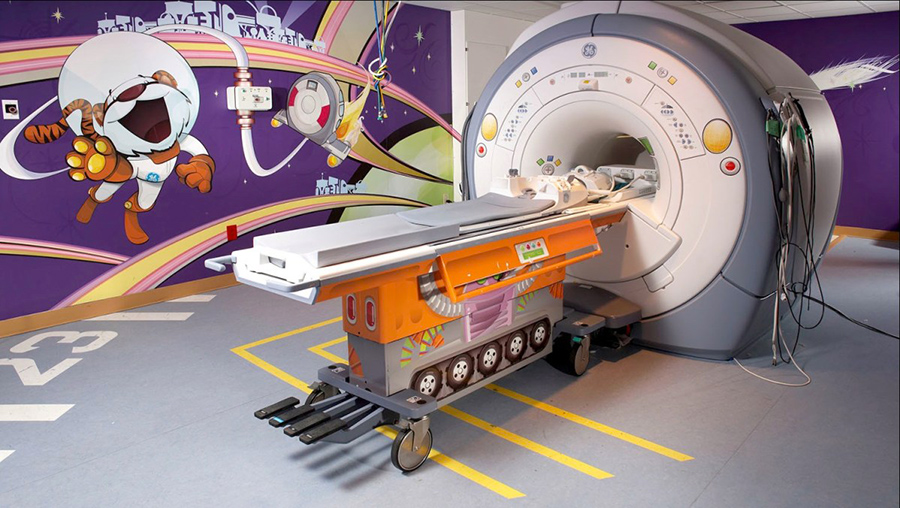 The results were truly amazing, no more missed appointments, children were even asking if they could come back tomorrow! … and with only a tiny minority now needing to be sedated, the knock on financial and clinical benefits were truly transformational.

A series of ‘pirate ships’, ‘jungle adventures’ and other child friendly machines flowed into the market.

But what of Kate Bush?

In 2014, 35 years after her last public performance Kate had finally plucked up the courage and ambition to design and deliver 22 incredible shows in London. By blending music, theatre, art and stunning costume design into a hi-tech digital circus, Kate delivered a spectacle worth waiting for in the eyes of her loyal fans.

And as a technologist with a passionate for service and experience Kate and Doug helped me to more clearly understand that if you design experience into the heart of your work, you can take steps towards life-long loyalty and earn the gratitude from those who are touched by your work…

So to those out there who say that customer experience is just window dressing, just a wrapper to the main event, perhaps you’d care to tell them Doug’s story: The story of “the man with the child in his eyes”.

(With thanks to Chris Daffy & Jim Harvey, who unknowingly in 2014, gave me the inspiration to shape this story).