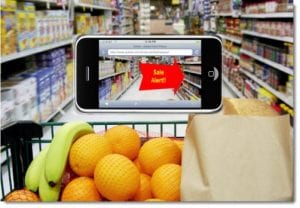 Augmented reality (AR) means amplified reality with graphics, sounds, haptic feedback and smell to the natural world as it exists. Virtual objects and information are displayed on top of the physical world, will make its way to our phones.

Just like the Internet of Things & Big data, Analytics, augmented reality is going mainstream. Search engines are already expanding on image search, allowing you to point your camera at something and search for information based on what the lens takes in.

Both video games and cell phones are driving & exploiting the development of augmented reality. Everyone from tourists to someone looking for the closest McDonalds can now benefit from the ability to place computer-generated graphics in their field of vision.

Unlike Virtual Reality, which creates a totally artificial environment like you are on the top of Eiffel tower or looking at Taj Mahal right now from your living room couch, augmented reality uses the existing environment and overlays new information on top of it.

Pokemon Go released in 2016 was the most successful game to use AR to superimposePokemon on physical background and all children and adults were mad chasing them in real world.

Recent innovation, Heads-Up Display (HUDs) glass with AR superimpose crystal-clear driving directions on top of the real world so you can easily navigate without taking your eyes off the road. It’s like Pokemon Go but all the adorable monsters have been replaced by driving directions.

Digital Marketing will get a boost with AR.  A new augmented reality campaign from Pepsi Max have stunned people in London, giving experiences like a prowling tiger, a meteor crashing, an alien tentacle grabbing people on the street, the bus stop window serves as a scarily realistic screen to bring these scenarios to life.

With AR, you can view your living room on a smartphone and see how virtual furniture would fit into the real world and decide what is good to buy.

Artificial Intelligence has brought virtual assistants like Siri, Alexa, Cortana, Google to life but AR can put a face to it and beef up the experience. Microsoft Hololens is currently leading the AR headset race.

There are several industries that will benefit from AR applications, including healthcare, tourism and entertainment. However, it is retailers who are the ones to use it more. With AR, your retail website is brought to life with a 360° online presentation of your store. In-store, augmented reality can easily display information and other visuals on packaged items with a simple image scan.

Lego’s “Digital Box” Provides Customers with an Interactive 3D Digital Experience. Aside from kiosks in stores, soon they will have mobile devices to be equipped with the capability to instantly bring up relevant information about any product in real-time.

Fashion retailer Forever 21 had put up a giant billboard which features a model walking in front of an image of the crowd below. The model occasionally leans over, and pluck someone out of the crowd. Sometimes, she drops them in her bag and happily walks off.

French cosmetic super chain Sephora is one of the leaders in AR marketing area. Their mobile apps & AR mirrors allow people to see how clothing, jewelry, and accessories look on them.

Augmented Reality cleverly blurs the line between the digital and the real by way of specially designed apps and unique visual ‘markers’ to intuitively visualise 3D virtual forms in physical realms.

We are still in the very early days of AR, and all of the future possibilities are difficult to imagine at this point. As this technology advances and gets more affordable, it will be easier for businesses to take advantage of it. AR helps to bridge the divide between the digital and offline world.