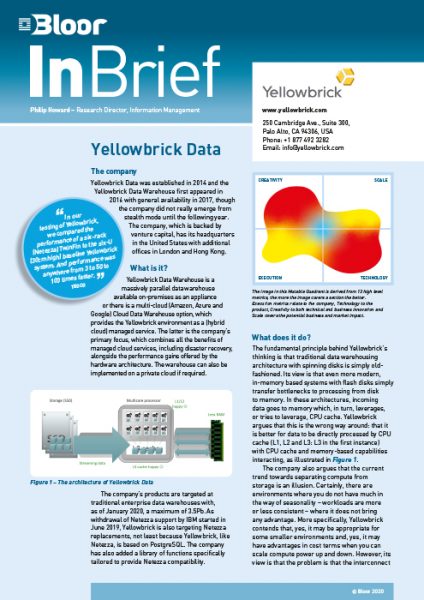 Yellowbrick Data Warehouse is a massively parallel data warehouse available on-premises as an appliance or there is a multi-cloud option.

The fundamental principle behind Yellowbrick’s thinking is that traditional data warehousing architecture with spinning disks is simply old-fashioned. Its view is that even more modern, in-memory based systems with flash disks simply transfer bottlenecks to processing from disk to memory. In these architectures, incoming data goes to memory which, in turn, leverages, or tries to leverage, CPU cache. Yellowbrick argues that this is the wrong way around: that it is better for data to be directly processed by CPU cache (L1, L2 and L3: L3 in the first instance) with CPU cache and memory-based capabilities interacting.