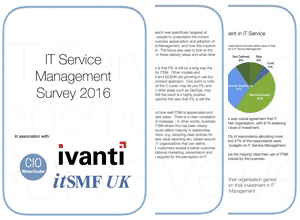 In September of 2016, the CIO WaterCooler invited CIOs from a mixture of industries, size of companies and regions to share how they and their organisations viewed the benefits of IT Service Management within their organisations and how ITSM was being used. This research was specifically targeted at senior IT people to understand the current level of business appreciation and adoption of IT Service Management, and how this impacts on investment and future plans with ITSM. The focus also was to look at the skills and attributes needed from people in these delivery areas and what other models beyond ITIL were in place.

The clear message from the respondents is that ITIL is still by a long way the most widely used and valued approach for ITSM. Other models and standards such as DevOps, SIAM, COBit and ISO20K are growing in use but ITIL is still seen as the overwhelmingly dominant approach. One point to note here is that those who responded, even at the C-Level, may be pro-ITIL and ITSM, with those who are now moving to other areas such as DevOps, may not have seen the value in responding. Still the result is a highly positive outcome from an ITIL perspective and supports the view that ITIL is still the predominant model in use.