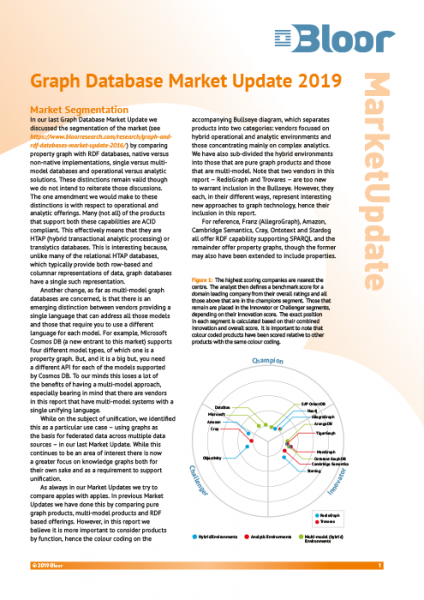 There have been a lot of new entrants to the market and changes amongst those within the market. As far as new products are concerned these include RedisGraph, TigerGraph, MemGraph, Trovares, and Microsoft Cosmos DB. Cambridge Semantics has unbundled AnzoGraph from its Anzo Data Lake offering and both Amazon and SAP have also entered the market. In the case of Amazon Neptune, it is an open secret that this is based on BlazeGraph while SAP has acquired OrientDB. Or, rather, it acquired the company that had acquired OrientDB, though we think that OrientDB was probably incidental as far as this acquisition was concerned. The one company that has withdrawn from the graph space is IBM. However, the company continues to work on the development of JanusGraph and it is also doing some interesting work around graphs – which we cannot disclose at this time – within its research labs.