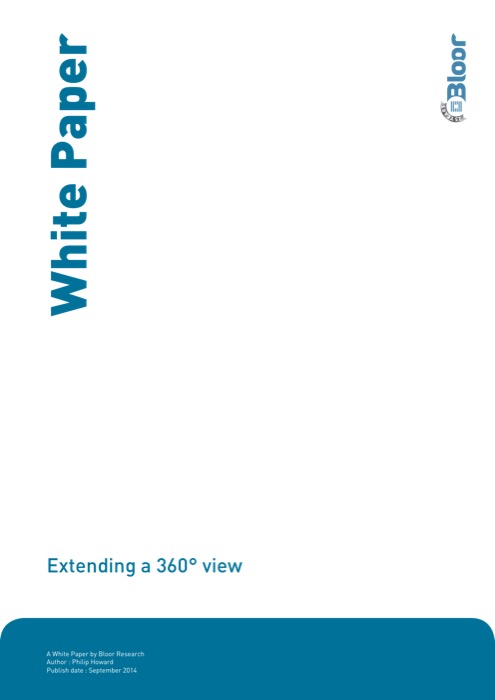 The concept of a 360° view, especially of customers, although it potentially applies to other things too, has been around for a substantial period of time. The idea behind the 360° view of customers is that the more you know about your customers the easier it will be to meet their needs, both in terms of products and aftersales care, and to market additional goods and services to them in the most efficient fashion. Thus a 360° view helps both in terms of customer retention and acquisition, as well as up-sell and cross-sell.

The concept of a 360° view was developed when most organisations were limited to information stored within their relational database systems, perhaps augmented by clickstream data and by information available from third parties, such as SIC codes, or location-based data. Today, we live in a very different world where there are far more sources of data that can be used to inform the organisations about customers. For example, we have call logs and emails that provide details about our previous interactions with that customer. Moreover, customers avidly pursue the use of social media (LinkedIn, Twitter, Facebook, bulletin boards and so forth) and are keen to express their likes and dislikes, their preferences, and their prejudices in these formats. These new types of data, whether internal or external, offer the possibility of expanding the concept of what might be termed the traditional 360° view into an extended 360° view. This is sometimes referred to as 720° view but this is geometrically invalid as a concept so we will focus on the former terminology: the extended 360° view.