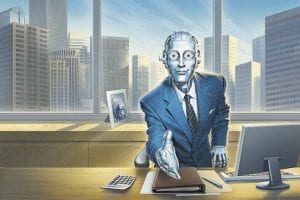 When I think of how a Mutable Business (a business in a constant state of evolution and change) can be made to work, I think of the maximum possible automation. Not just automation of the business process but the automation of the necessary governance too. And this needs to be “clever” automation (exploiting machine learning and AI), automating every routine so that people can deal with the hard stuff, as otherwise the complexity of the changing systems will get out of control.

I prefer to define AI as Augmented Intelligence (rather than Artificial Intelligence). But it rather depends on how one defines “intelligence”, I guess. I think we are approaching – or at – an inflection point for the acceptance of machine intelligence, which means that it could move from hype to disruptive actuality quite fast. Of course, this also implies that predicting just “when” it will take off is risky – one can’t predict past inflection points…

So I asked Andrew Burgess, a Strategic adviser on AI and RPA:

“From what I understand,” he says, “the concepts are very similar (managing processes across multiple applications) but I think the IT and Business Process worlds have evolved along different branches. RPA was born out of business process analysis (from a team at Barclays, actually) and the majority of RPA effort is focused on that rather than IT processes. I think the difference is due to the users – RPA is designed to be used by tech-savvy business analysts rather than process-savvy developers.

And that fits well with the ideas I’m forming around RPA, remembering that many “fresh starts” can be firmly based on existing, but under-utilised, technology – in fact, most are.

Note: “RPA is designed to be used by tech-savvy business analysts rather than process-savvy developers” – this is the major issue facing development and automation today, in my view. The business-developer silos MUST break down, partly because the business increasingly owns automation – i.e., the automation budget – which is why I like “citizen developer” approaches to systems development such as Mendix and Bizagi.

Siloisation is the killer stalking Mutable business automation – and attempts to make the Developer silo more business-friendly, such as DevOps used (in my opinion) inappropriately, might actually be part of the problem, rather than the solution.