Who is Niccolò Machiavelli?

Niccolò Machiavelli (1469-1527) was a Renaissance politician and philosopher in Florence. In his book Il Principe (The Prince),  Machiavelli advises a  ruler on how to increase his power and influence. 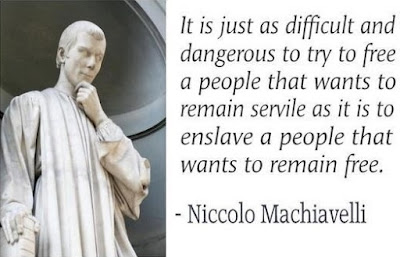 Who is Philipp S. Mueller?

Philipp S. Mueller teaches strategy and leadership at the University of Salzburg, Austria, and at Sciences Po in Paris, France, and is Director of Public Affairs for Central & Eastern Europe at CSC, the ICT services and solutions provider.

The professor and leadership consultant is the author of a book:  machiavelli.net .  In an interview published in  Ericsson Business review in 2014, Dr. Mueller says:

What I love about Machiavelli is that he was able to see the alternative logic that was developing and to understand very clearly just what the rules of this new game would be.

He can be read in different ways – But my interpretation distinguishes between Machiavelli’s actual writings and the later popular construction of  Machiavellianism as the idea of using power to get whatever you want.

I prefer to look at Machiavelli as somebody who really understood a new emerging world before anybody else and  who distinguished moral questions from strategic questions – not because moral questions are irrelevant, but because we need to have a clear sense of the landscape we inhabit before we  start asking how we should behave in that landscape.

Now these things might be good or bad – of course, I personally think they should be good – but whatever your intentions, you still need to understand the cloud society logic in order to make them happen.

Why we need Digital Machiavellians

The Digital Machiavellians are needed because the world becomes in-comprehensive

There are three core ideas – data, networking and non-territoriality. … the world is becoming a space of flows rather than a place of space.

Machiavelli says there’s no room for thinking about morality if we want to understand the logic of a particular society – at least not at first. But at some point we can – and indeed should – plug morality in.

This is insightful. The digital society is not optional; it happens and it is a war zone as much as it is a peace and progress territory

It must deliver what we expect in terms of democracy, privacy, and distribution of resources, and we have to hardwire these expectations into every digital process and institution.

As civil societies, we have fought hard to build our constitutions and our juridical systems of checks and balances,  and we should not throw these out just because somebody happened to invent the internet.

I did search for Internet and Terrorists page  The page was archived  in 2009, and we now enter 2016. We read:

Terrorists increasingly are using the Internet as a means of communication both with each other and the rest of the world. By now, nearly everyone has seen at least some images from propaganda videos published on terrorist sites and rebroadcast on the world’s news networks. Western governments have intensified surveillance of such sites but their prosecution of site operators is hampered by concerns over civil liberties, the Internet’s inherent anonymity, and other factors.

The Machiavelli double standard is based on multiple truths co-existing.  The most famous analysis of Machiavelli comes from Oxford professor Isaiah Berlin

I came to the conclusion that there is a plurality of ideals, as there is a plurality of cultures and of temperaments. I am not a relativist; I do not say “I like my coffee with milk and you like it without; I am in favor of kindness and you prefer concentration camps” — each of us with his own values, which cannot be overcome or integrated. This I believe to be false. But I do believe that there is a plurality of values which men can and do seek, and that these values differ. There is not an infinity of them: the number of human values, of values that I can pursue while maintaining my human semblance, my human character, is finite — let us say 74, or perhaps 122, or 26, but finite, whatever it may be. And the difference it makes is that if a man pursues one of these values, I, who do not, am able to understand why he pursues it or what it would be like, in his circumstances, for me to be induced to pursue it. Hence the possibility of human understanding.

That is the essence of Machiavelli.

Someone once remarked that in the old days men and women were brought as sacrifices to a variety of gods; for these, the modern age has substituted the new idols: isms. To cause pain, to kill, to torture are in general rightly condemned; but if these things are done not for my personal benefit but for an ism — socialism, nationalism, fascism, communism, fanatically held religious belief, or progress, or the fulfillment of the laws of history — then they are in order. Most revolutionaries believe, covertly or overtly, that in order to create the ideal world eggs must be broken, otherwise one cannot obtain an omelette. Eggs are certainly broken — never more violently than in our times — but the omelette is far to seek, it recedes into an infinite distance. That is one of the corollaries of unbridled monism, as I call it — some call it fanaticism, but monism is at the root of every extremism.

This is why we need Digital Machiavellians. We do not want the new Digital Network to harbor evil in our world

Donald Trump is an illustration of  a Digital Machiavellian, or at least the clever use of this image to win elections in 2016.